Humpback whales are organizing in huge numbers, and no one knows why 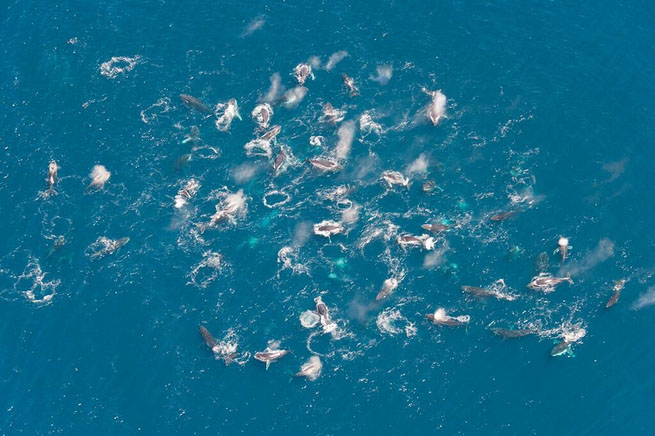 Humpback whales are organizing in huge numbers, and no one knows why

It flies in the face of typical humpback behavior

The humpback’s scientific name, Megaptera novaeangliae, literally means “big-winged New Englander.” They can use their “big wings” to maneuver backwards, though they have no beeping sound to warn other animals that they’re putting it in reverse.

The world is ending and only the whales know. At least, that’s one explanation. Humpback whales are normally pretty solitary—scientists used to call groups of 10 to 20 “large.” Now they’re congregating in groups of 20 to 200 off the coast of South Africa. Something is definitely going on here, but so far experts are stumped.

In fact, Humpback whales aren’t supposed to be hanging out in that region in the first place. Humpbacks migrate up to tropical waters to breed, but they typically feed down south in the icy waters of Antarctica this time of year. Yet scientific expeditions keep seeing these super-pods (not to be confused with super PACs, which are equally giant but much more dangerous), which were finally compiled and published at the beginning of March in the journal PLOSone. The researchers have a few ideas about why the humpbacks are organizing, but no clear answers yet. So far the consensus seems to be: this is pretty freakin’ weird.

Most of the whales seem to be young, begging the question of whether the western coast of South Africa is like the humpback version of the local mall for tween whales. They’re just looking for a fishy Orange Julius, or perhaps a krill-based Panda Express to hang out at on a Saturday afternoon. Because it’s not like 200 whales—each weighing about 65,000 pounds—can feed just anywhere.

Congregations of whales usually indicate parts of the ocean that are especially productive. There has to be a dense concentration of prey to support that many humpbacks. And yes, the word “prey” might sound strange for a species known for singing songs and being friendly to other mammals. Lest we forget, humpback whales do hunt for their food. They’re not vegetarians. They eat everything from krill to plankton to small fish, regardless of whether they speak whale. They even have a specialized way of hunting where they gang up on schools of fish to try to eat them all at once. It’s called bubble net feeding. The humpbacks divide up, some swirling around a group of fish and some blowing air, such that the circling whales can drive their victims into a net made of bubbles. This confuses the fish, trapping them inside, until one whale sounds the call and they all rush in, mouths agape, swimming upwards through the teeming mass of fish.

Since they spend a lot of time alone, humpbacks can perform a similar maneuver on their own. And some humpbacks don’t even know how to bubble net feed. It’s not intrinsic—it’s a learned behavior. Some pods know how to do it and some don’t. Dolphins have a similar hunting pattern where they squeeze groups of fish into a small area, then take turns darting through to feed. And hey, humpbacks have been known to swim around and interact with bottlenose dolphins, so maybe there’s some big information exchange going on in the seas that we’re unaware of.

These enormous whale congregations are clearly for feeding, at least in part, but no one is really sure why there are so many of them. It seems to be a recent phenomenon unique to the last five years or so, so it could be that burgeoning whale populations are enabling these teeming masses yearning to breath free. At one point about 90 percent of the world’s humpbacks had been hunted down, but they’ve been on the rise since becoming a protected species in 1996. Maybe humpbacks were always this social, and there just weren’t enough of them for us to notice.

Or maybe they just weren’t doing it in areas where we could see them. If hundreds of whales were gathering smack in the middle of the Pacific Ocean, we probably wouldn’t see or hear them (even though their songs can be heard from 20 miles away). And if a whale sings in the ocean and there’s no one there to hear it, it definitely still made a sound.

This site uses Akismet to reduce spam. Learn how your comment data is processed.